Known as the Cincinnati Cobra, Ezzard Charles was a professional boxer and World Heavyweight Champion from 1949 – 1951. A long time Cincinnatian, he was also an entrepreneur, a musician, a multilinguist, and a good-will ambassador to the West End community, where he lived at the height of his boxing career. The statue is to be erected within Laurel Park along Ezzard Charles Drive in the West End of Cincinnati.

Local artist John Hebenstreit, known for the Black Brigade monument in Smale Riverfront Park, began sculpting the 13-foot statue of Ezzard Charles in 2017. The work of the Ezz Committee—consisting of two former Haile fellows, designer Jason Snell & videographer Kailah Ware, as well as architect Jaipal Singh, writer James Cunningham, biographer Bill Dettloff, and Hebenstreit—supports the concept originated by CPF Board member and pop-artist, Andrew VanSickle.
“We are extremely grateful to the Cincinnati Parks Foundation and the City of Cincinnati for honoring the legacy of my father in such a way,” stated Ezzard Charles II.
The Ezzard Charles statue project prompted a revitalization of Laurel Park, including the sculpture, the planting of over 100 new trees, the installation of benches, wayfinding signage, a progressive web application (app), free public WiFi, and an accessible plaza for all to enjoy. “The Cincinnati Parks Foundation appreciates the project’s many donors, and we are so thankful for the Haile Foundation’s end of year support, which has brought us to our fundraising goal,” stated Jennifer Hafner Spieser, CPF Executive Director.
Kara Kish, Director of Cincinnati Parks, offered her gratitude: “This project will have a major, positive impact not only on Laurel Park, but will stand as a source of pride for the surrounding West End community, where Ezzard Charles lived. There is zero doubt we would not be where we are today without our partners at the Cincinnati Parks Foundation who have driven this effort for years, as well as the generosity of each individual donor. I can’t wait to see and celebrate the finished product.”
The Ezzard Charles statue will be dedicated on October 9, 2021 at Laurel Park at the 3rd Annual Ezz Fest.
You can still give and be part of a project that will last for generations to come!
Thank you to ALL of our sponsors:
Cincinnati Parks Foundation’s Board Members & Emerging Leaders Committee
PNC Charitable Trust
MadTree Brewing Company
FC Cincinnati
The Maschmeier Boys & Girls
Montgomery Inn
Artswave
Larosa’s
O’Dell Owens
Cincinnati Bell
GE 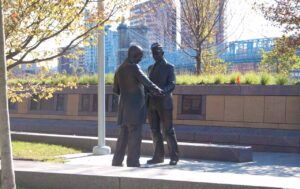 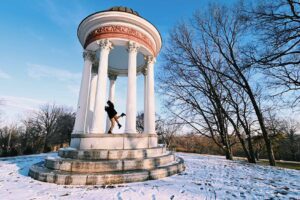